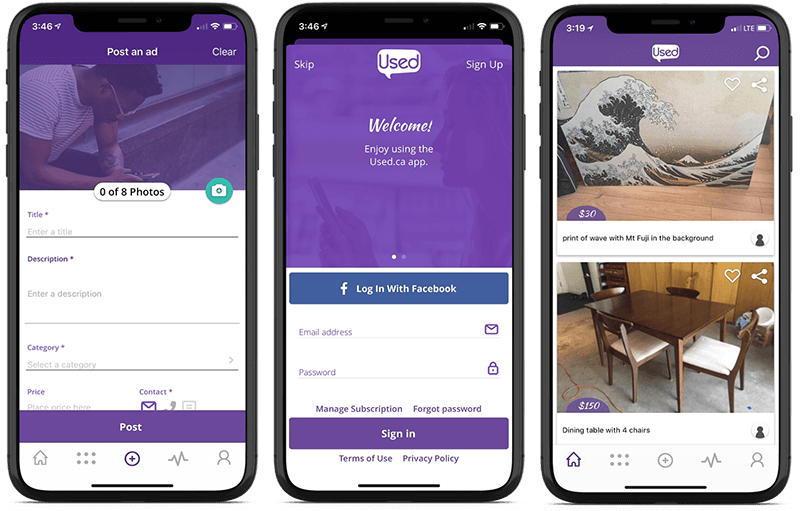 Used.ca was launched in 2005 with the sole purpose of reducing landfill waste in Vancouver, BC by selling used items through an online platform.

Since then, the website has recorded over 55 million page views per month. To continue the rapid growth of Used.ca users and to streamline the buying and selling process, we partnered up with the guys behind the operation to transform the Used experience into a mobile app.

Developed with passion and a whole lot of love, the Used.ca app makes buying and selling goods a breeze – with a built in chat, personalized notifications, location-based searching, and buying and selling features that can all be accessed from your mobile device, we couldn’t be more excited to have been a part of making Used more, well, useable!

The Used.ca mobile marketplace app was already in the process of being developed when we decided to contact the guys and gals behind the operation over at Used.ca, and offer a hand. We ended up arranging a meeting between our two teams and eventually decided to join forces, in hopes that our modern approach to mobile application development would be a huge asset to their team.

Already aware of the large market for the app and the huge online user-base, here at FreshWorks we were thrilled to be working on such an exciting project and knew we wanted to get things just right – the first time around. After hours of research, planning, wireframing, designing, and finally, development – in October 2017 we got together with the team at Used.ca and celebrated the birth of our shared baby at the app launch (pictured above). The app development for startups project was met with an onslaught of excitement, positive feedback, and a surge of mobile users. 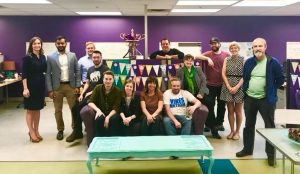 The UsedCa and FreshWorks team together at the UsedCa office.

The Used.ca mobile marketplace app was a massive project with many moving parts. When FreshWorks first started working on the app, our team was still incredibly small, but our passion and determination for excellence remained the same as it does now. 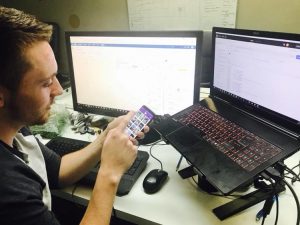 Searching was one of the most important and unique features of the app. We wanted it to make it personalized, but also user-friendly. In order to make this happen we had to put in the work – research work, that is, diving into the existing APIs, UI/UX research, and other resources to make sure all of the features that were planned would work seamlessly and effectively. A big thank you to the Used.ca team for providing us with the original designs and in general for being such an active part throughout the whole development process. It made our work so much more fun.

As with all of our projects, our extensive research proved to be a huge asset. Once we had the know, we began to work on the how, and eventually produced the what – an app that does more than just copy the Used.ca experience, but enhances it using the power of your mobile device.

Alerts & Notifications
Messaging
Searching
Buying & Selling
Users who access Used from their mobile phones can now specify if they would like to be alerted every time there is a posting for something that interests them. The process is easy. After signing up for an account, a user can access their settings panel and add, delete, or manage their personalized alerts using keywords.
The keyword is designated by the user, and becomes associated with a specific category. For example, if Tim was a champion air hockey player and wanted to be alerted every time a new air hockey table was posted for sale, he could add the keyword "Air Hockey" to his alert section and be notified if there was a new posting in his area with the associated keyword.
The notifications feature of the app allows both buyers and sellers to receive notifications associated with alerts, their postings, or whenever they receive a message.

With the messaging feature of the Used app, users can now instantly connect regarding purchases, transactions, and items for sale right within the mobile interface.
Buyers can message sellers from their advertisements by clicking the chat icon in their ads. Sellers can select if they would like their chat feature to be enabled for every post they make, encouraging users to contact them through the messaging system or through traditional communicative features such as email or phone.
The messaging feature allows the user to buy or sell an item without ever having to leave the Used mobile application.

The Used.ca mobile application has not 1, not 2, but 3 different ways to search for items (not including customized notifications).
Now from your mobile device you can enter a specific address and search for items within a user-specified radius. Make the range as small or as large as you want, and our algorithms will be on the hunt for your item within your designated radius.
You can also designate a search "region" by selecting a location from our list of popular cities, towns, and even provinces, or, use your current location to designate your region.
The third way to search is simply with the classic type and go, which will search automatically for items within the apps automatic region (based on your location).

The primary purpose of Used.ca is of course, the buying and selling of used goods, so we wanted to perfect that experience in the mobile marketplace app.
Buyers can browse ads either from their home page, using alerts and keywords, or from a matrix of categories each beautifully coloured with an image related to that category. When a user touches an ad, they can view more information about that ad, and see the methods of contact made available by the respective seller (email, phone, or messaging within the app).
These features coupled with the search feature described above makes the Used.ca experience not only renewed, but enhanced for mobile users, and continues to help buyers and sellers save the planet through the encouraged re-sale of used items. 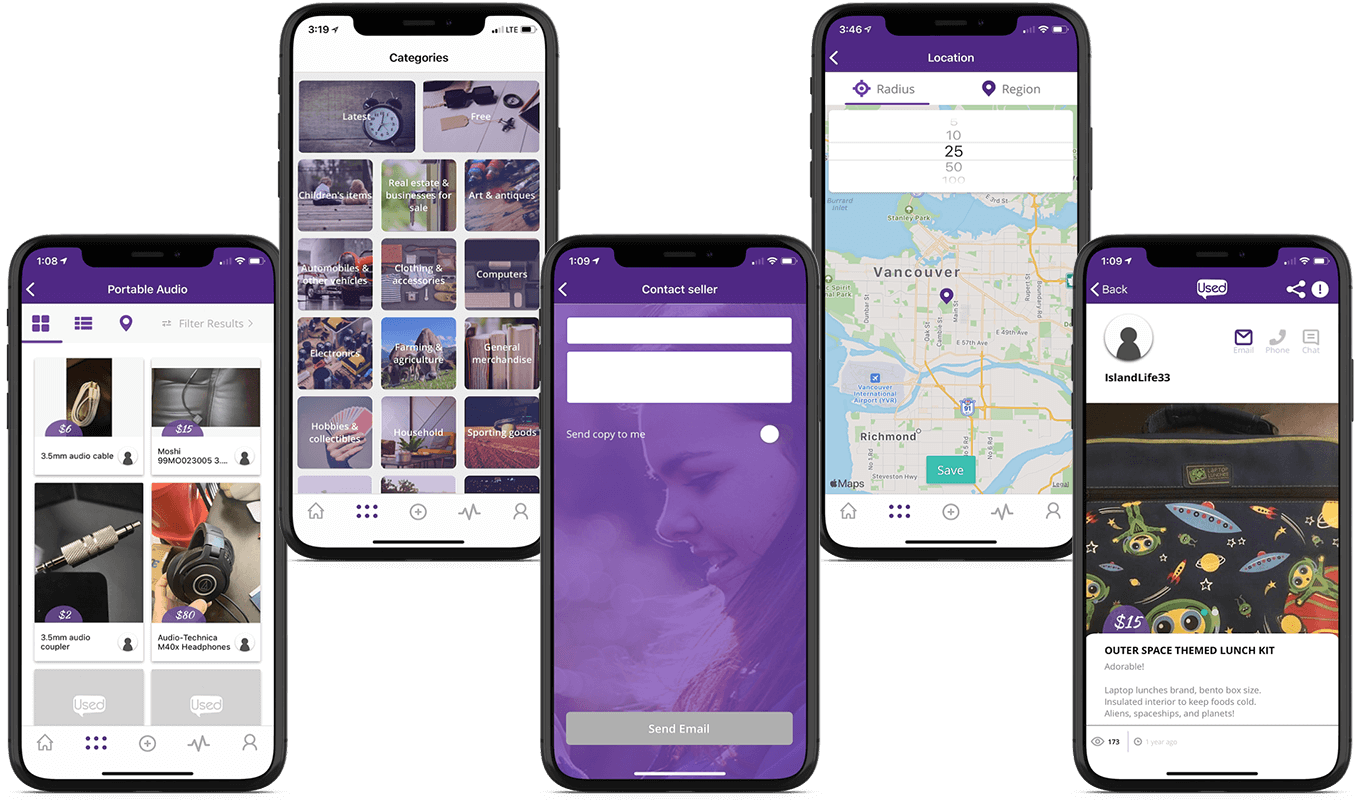 The UsedCa Android app was built using the Kotlin programming language, while the iOS app was developed in Swift.

They were proactive in getting what they needed from us…. They respected our tight budget and tight deadline.

"Despite a lack of marketing, the app has 6,000 active monthly users. The Android app is 99.2% crash-free, while the iOS app is 98.6%. Though a more established company may have had more confidence at times, FreshWorks was proactive in moving development along effectively and produced an impressive deliverable at a very affordable rate."

UseSafer is a tool to help alert emergency responders when a user has potentially overdosed on a drug.

The CoquitlamConnect mobile application was developed as a way for citizens to further engage and interact with their city.

A responsive web and iOS application developed as part of the ongoing government modernization efforts.