This First Nations digital health app was developed in only 6 weeks to share critical COVID-19 information and can be extended to deliver many digital health services. 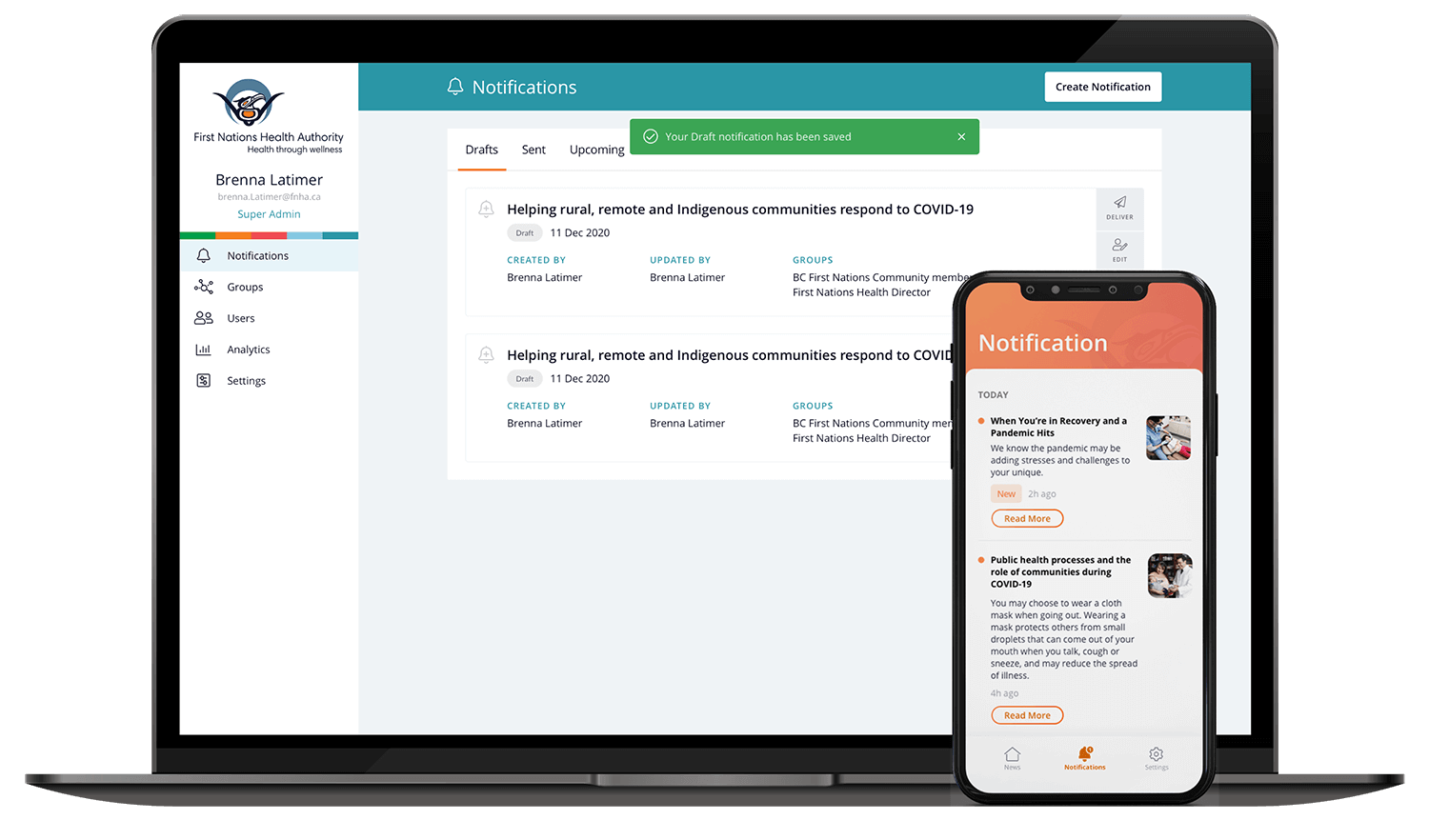 When the First Nations Health Authority (FNHA) was trying to decide how to best support their communities during the COVID-19 pandemic, one thing became clear quickly; they needed to be able to share critical information as quickly and effectively as possible with its community. Useful information was being lost in a media storm and FNHA knew that they needed to establish a way to ensure their key messages would be heard among a wave of communications.

Due to the rapid spread of COVID-19, time was of the essence if this solution was going to be effective. Through great collaboration, our team was able to develop this First Nations digital health app in a little over 6 weeks.

They work to reform the way healthcare is delivered to BC First Nations through direct services and collaboration with provincial and national partners and by transforming into a digital health company to keep up with the technology trends in healthcare settings. The FNHA is governed by and serves BC First Nations individuals and communities.​

No Time To Waste

During a pandemic and global health crisis like COVID-19 it is of key importance to get factual information to the public in a timely manner. We now understand that more than ever. Like many other communities across the world, members of the First Nations in BC were receiving far too much information. It quickly came to the point where existing communication channels like e-mail or social media were not sufficient anymore. FNHA was challenged to successfully deliver key information and messages that were important for the health and wellness of its served communities.

The issue of critical information getting lost in a sea of emails and other less important messages needed to be addressed as soon as possible in order to be most effective. If it took months to create a solution, opportunities to have the biggest impact may have passed. So when the First Nations Health Authority approached FreshWorks Studio at the end of April 2020, it was already clear that the biggest challenge for this healthcare app development project would be the very short timeline. Finding a way to share information with the First Nations community that would be actioned was very challenging, but developing this capability extremely quickly would be even tougher.

With an accelerated timeline and a hybrid agile approach with one week long sprints, the FreshWorks team had their work cut out for them right from the start.

During the first week of the project, FNHA and FreshWorks worked together through an expedited discovery process. During this time, the key functionality for the app was decided. Leveraging the mobile devices which all community members had, FNHA would create a unique communication channel that would not allow any other competing messages to be sent through it. The app would send  notifications directly to community members’ devices and a set of resources provided by FNHA would be available to access through the app as well.

During this first sprint it was decided that FNHA would need both a set of mobile apps and a web admin dashboard with built-in analytics.The mobile apps would be available on both iOS and Android in order to ensure as many community members as possible could access them. The web admin dashboard would allow FNHA team members to prepare and share communications, while reviewing private analytics that helped them observe how their information and resources were being received within the communities.

One of the main challenges that came out of the discovery phase and was addressed during the design phase by the FreshWorks team was FNHA’s desire to properly represent all five of the different regions it supports. Each of the regions has a unique colour that is used in their communications and is representative of a particular part of that region’s inspiring geography. Within only three revisions, the design team was able to represent all five regions in the app. 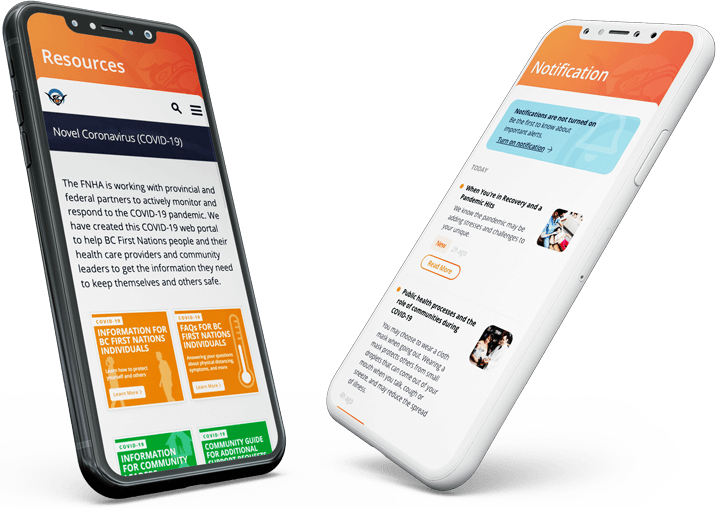 During the second sprint, six developers and one quality assurance specialist took center stage. Due to the very short timeline for delivery the healthcare app development was undertaken using a hybrid agile approach. For this project, that meant that as soon as a feature was pushed live to production, testing began. If quality assurance brought any bugs or issues to light, it was addressed as part of the ongoing sprint rather than waiting for a testing period.

At the end of each week a functioning healthcare application was delivered to the First Nations Health Authority for user acceptance testing. This allowed FNHA to start testing with their stakeholders concurrently with the development process; providing valuable feedback and UX research that could be implemented right away.

After only six weeks, the development of the First Nations digital health application was completed and it was launched to the app stores.

The app was officially announced in a press release by the First Nations Health Authority on June 16, 2020.

Being part of such a fast-paced project and communicating with a lot of stakeholders provided a great opportunity for growth within our team. 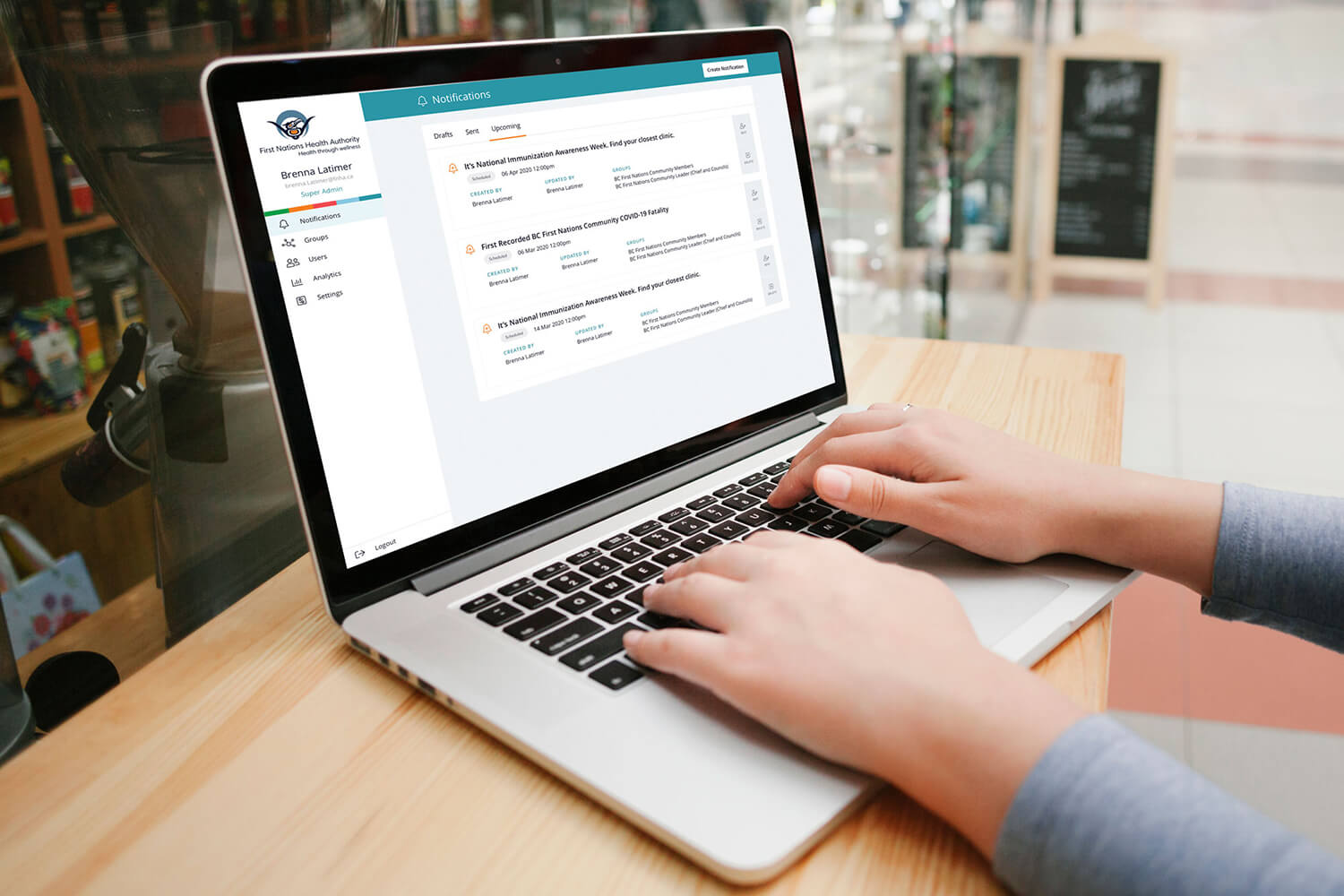 With an expedited timeline due to the urgent need for this solution, the team was proud to deliver several features so quickly.  They completed a set of well designed and user friendly native mobile applications, along with a web admin dashboard and custom built analytics all within the tight time frame that was initially proposed.

Web Admin Dashboard
Analytics
Notifications
Access Web Content
The web admin dashboard is used by the First Nations Health Authority to draft, schedule, and publish the critical content that is shared to the users of the mobile application. It sends messages via push notifications.

Due to the strict regulations on privacy and security that FNHA follows, it was important that no third party application was used for analytics. Instead, the FreshWorks team custom developed an analytics solution for this multi-platform system.

The main challenge the First Nations Health Authority was facing prior to the development of a healthcare app was the difficulty of reaching community members and providing them with critical information. The feature addresses this issue by sending push notifications directly to the user’s mobile device.

The mobile application allows users to access content found on the FNHA website. This includes access to things such as the organization’s podcast, a COVID-19 self assessment test, wellness tips, and information on available services.

The iOS healthcare application was developed in the Swift programming language using the xCode software development kit. The Android app was built in Kotlin and utilizes the Android Studio development SDK.

The backend of the web application for the First Nations Health Authority was built using Node.js. The frontend uses HTML and Angular. It also uses MongoDB.

The apps are hosted on FNHA’s Azure cloud platform.

With a timeline this short, there are lots of other features on the table for the future. While the First Nation Health Authority app was originally developed in response to the COVID-19 health crisis, it can be extended to include further digital health features to support a broad variety of programs and services. Now that the community has adopted this app, FNHA has the ability to build set of virtual care solutions that can be delivered directly to their community members.

The project managers collaborated extremely well to ensure all issues were managed to support a successful launch.

"FreshWorks was extremely proactive from the outset as they responded to the vendor selection process, provided rapid prototyping, and sought feedback on a continuous basis to ensure alignment and FNHA customer satisfaction."

Shopify website that enables users to directly purchase and pre-order from the farm online.